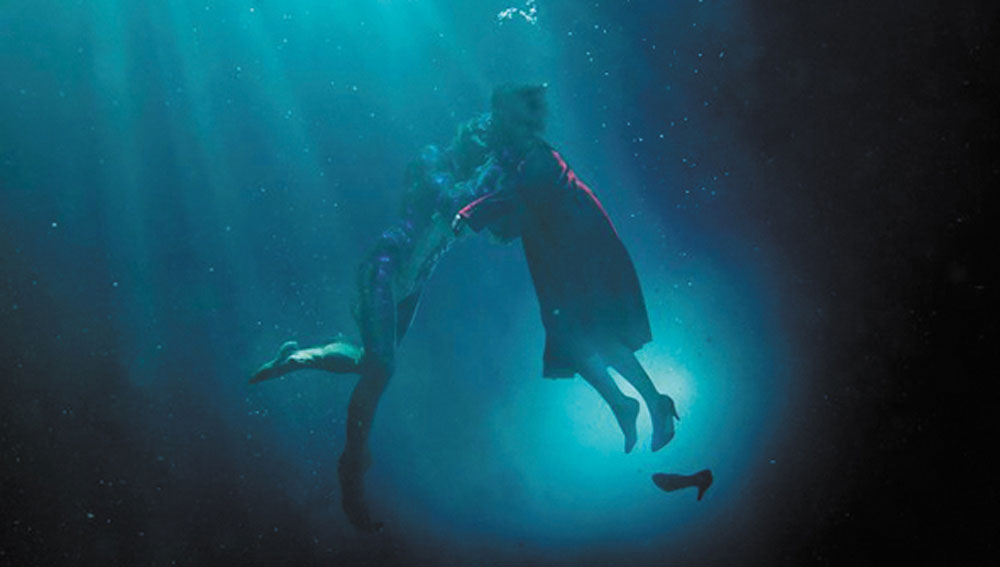 The Shape of Water is, like its male romantic lead, something of an oddity.

Directed and co-written by Guillermo del Toro, it defies easy taxonomy into genre.

The film might be considered a love story where boy meets girl – if by girl you mean a mute orphan and for boy a fish-man hybrid dragged from a South American waterway to be experimented on in a top-secret American military lab during the Cold War.

More meaningfully, it could be classified as an inverted monster story or a transgressive fairy tale.

It concerns outsiders (or fish-out-of-water), people (or not-quite-people) who defy the conformity of America in the straight-laced 60s to find acceptance and love from each other.

Elisa has little social contact outside near neighbour, the worldly wry but kind-hearted Giles (Richard Jenkins).

Giles and Elisa share a love of classic Hollywood musicals and even live above an ornate cinema that is mostly empty of paying customers.

Reflecting this appreciation of movie-filtered ‘reality’, every frame of The Shape of Water is sumptuous to look at, stylistically arresting and symbolically coloured or composed.

Elisa works as a cleaning woman at the world’s most lax top-secret facility (the plot should not be examined too stringently). The unnamed creature she encounters is a less rubbery evolution of Gill-man, the classic monster from 1954 schlock horror B-film Creature from the Black Lagoon.

Elisa realises she can communicate with the creature through sign language. They  start having laboratory ‘dates’ that include music appreciation and the amphibian’s favourite repast of boiled eggs.

The creature been captured and tormented by Colonel Richard Strickland (a darkly magnetic Michael Shannon), who has a face so square-jawed that the contours appear to have etched in heavy HB pencil.

Strickland, it becomes clear, is the embodiment of American vice.

He is narrow-minded and solely results-oriented, militaristic, racist, sadistic and punitively religious. He has an ostensibly perfect but emotionally alienated whitebread family and fills the void with consumerism.

Strickland is patently the real ‘monster’ and his nefarious plans to dissect the creature for Space Race experimentation prompt Elisa and an unlikely bunch of allies to plan a daring escape.

Among those allies are cleaning partner Zelda (in a typically robust performance by Octavia Spencer) whose garrulousness more than makes up for Elisa’s silence.

A secret supporter is the humane Dr Robert Hoffstetler (Michael Stuhlbarg), a facility scientist who is also a Soviet spy and appalled at both the American and Russian plans for the creature.

While the supporting cast is uniformly impressive, Hawkins’ virtuoso performance as Elisa is the wellspring of the film.

From the marginalised, overlooked and literally silenced mouse-like menial worker we see the triumphant emergence of a determined, strong and vibrant woman. A look of satisfaction she gives Strickland at one point is worth the price of admission alone.

The film runs a little long but is a luminous and lyrical piece of magical realism with great dollops of social commentary.

It deserves to make a splash at the Oscars even if it doesn’t reach the high watermark of the emotional impact set by another del Toro allegorical fable, 2006’s Pan’s Labyrinth.