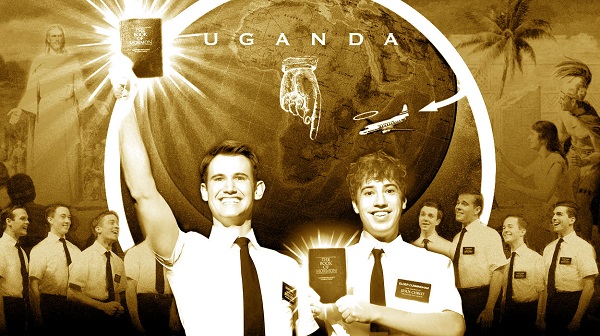 Religious satire has existed for millennia, pre-dating Christianity itself.

From the work of Greek playwright Aristophanes – circa 400BC – through to last year’s ribald Seth Rogen animated comedy Sausage Party, the tradition of art questioning belief is fundamental to humanity’s ongoing spiritual evolution.

In his 2003 book A Serrated Edge: A Brief Defense of Biblical Satire, theologian Douglas Wilson reminds us that “satire is a kind of preaching… Satire treats the foibles of sinners with a less than perfect tenderness”.

Trey Parker and Matt Stone, of South Park notoriety, have ribbed religion since their early animated short, 1992’s ‘Jesus versus Frosty’. The duo could certainly be accused of “less than perfect tenderness” when it comes to their wide-ranging satirical targets.

No cow is too sacred for these equal opportunity provocateurs – race, sexuality, popular culture and religion are all fair game, with everyone from bleeding hearts to conservative hard-liners squarely in their sights. The Book of Mormon – developed by Parker and Stone with Grammy-winning Avenue Q songwriter Robert Lopez – debuted on Broadway in 2011 to astonishing, ongoing success.

Melbourne’s Princess Theatre plays host to the debut Southern Hemisphere staging of The Book of Mormon. Showcasing an ensemble that is equal parts local and international, those familiar with the Broadway Cast Recording will be pleased to hear that all of the show’s rousing anthems, pin-drop balladry, fist-pumping reprises and riff-driven rock tunes are presented in exuberantly rude health… with emphasis on the rude.

Similarly, Book of Mormon’s choreography, production and sound design are mesmerising, at once lampooning more straight-laced musical theatre fare and simultaneously exalting in its traditions.

Without ruining The Book of Mormon’s many narrative and musical surprises, rest assured you’ll bear witness to:

As Douglas Wilson reminds us, “satire pervades Scripture”. The Book of Mormon, with a wicked gleam in its eye, challenges us to open ourselves to Parker and Stone’s parodic fable and its confronting reflections on the role of mainstream religion in an increasingly troubled world.

Preview a track from the Original The Book of Mormon Broadway Cast Recording here.