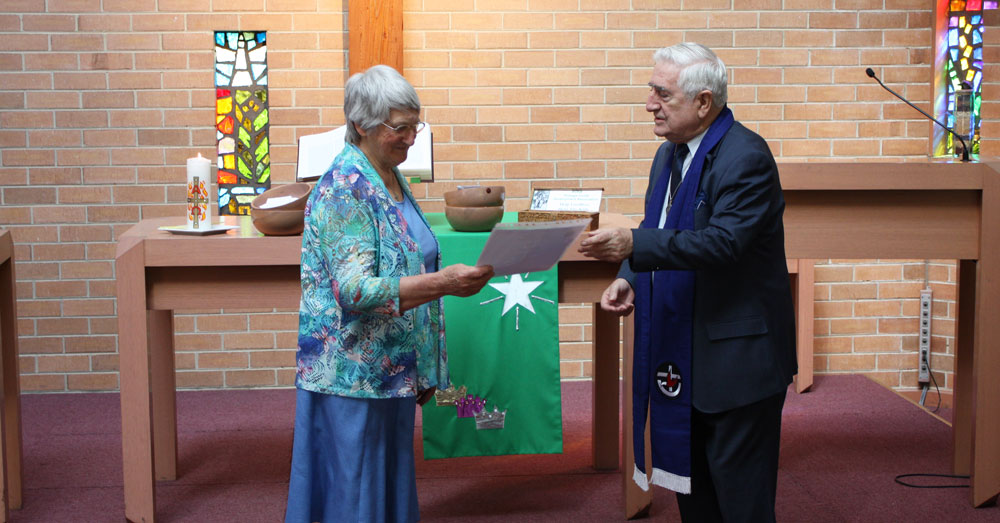 One of Dorothy Gordon’s earliest memories as a lay preacher was the night the Russians launched the Sputnik satellite into space.

“There was a very small congregation that night. There weren’t many of us there because they were all looking at Sputnik,” Dorothy recalled.

Dorothy’s journey to become a lay preacher began more than 60 years ago when she first met her husband, Ron.

Ron was a theological student and Dorothy was curious to learn more about his studies.

“I asked my father, Rev Frank Woolhouse, if he had a book I could read so I could have conversations about it with my boyfriend,” Dorothy said.

“He said one book would probably not be very useful, but if I did the local preachers’ study, I could become accredited and help to fill the need in the circuit for preachers.”

Dorothy was presented with her accreditation as a local preacher on 26 November 1957, exactly 21 years to the date she was baptised.

Lay preaching took a backseat after the birth of the couple’s four children, but Dorothy remained actively involved in the local quarterly meetings, the equivalent of the church council.

In 2000, Dorothy was elected secretary of the Lay Preachers Association of Victoria and Tasmania at the association’s annual conference.

“The president, Joan McRae, said we’re not going home until we have a secretary,” Dorothy said.

“I wanted to go home, so I said I’ll be secretary.”

Dorothy said her time as secretary – and later president – of the Lay Preachers Association of Victoria and Tasmania was a steep learning curve. During that period, she visited almost every presbytery in the synod, including Sheffield Uniting Church in Tasmania, where she was baptised.

“Joan was very refreshing for the Lay Preacher Association and really revolutionised it and brought it up to date,” Dorothy said.

“The training lay preachers get now is pretty fantastic.

“These days it may be very difficult for some congregations to operate and hold services of worship without the help of lay preachers.”

Following the Black Saturday bushfire, Dorothy and Ron moved from Yarra Junction to Kilsyth. They began worshipping at St Margaret’s Uniting Church in Mooroolbark, where their daughter Rev Jennie Gordon was minister at the time.

In January, St Margaret’s presented Dorothy with a certificate recognising her 60 years as a lay preacher.

Since her retirement, Dorothy has continued to lead worship services in local congregations. She and Ron also share services when a congregation require an ordained minister for Holy Communion.

“It was unusual at first for two people to lead worship together in a Uniting Church, but we believe we have made it a very acceptable situation,” Dorothy said.

“At least the congregations keep asking us to return!”