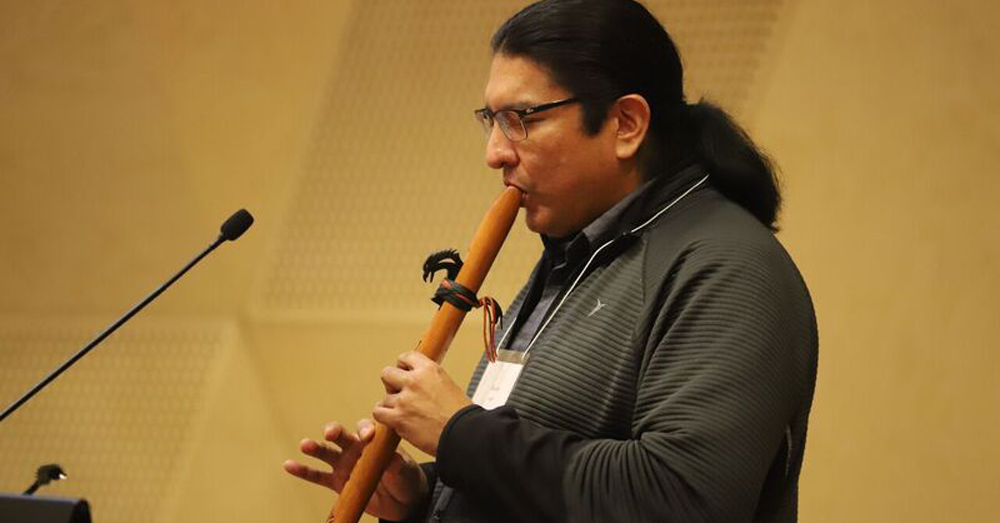 It’s the fifth day of the 2018 Uniting Aboriginal and Islander Christian Congress National Conference in Geelong.

After four days of listening to Harley Eagle, a First Nations trauma expert from Canada, Congress members are opening up to each other about their pain.

“My wife was the eldest of 14 children and one day her mother and father went to the races on the mission, and the welfare came and took the 14 of them all in one hit.”

“My brother died two months ago. We brought his body home yesterday. He didn’t speak good English, so he didn’t know when he was diagnosed with cancer.”

The theme of this year’s conference is “Trauma and Healing: lessons from Canada.”

Harley is a cultural safety facilitator and a member of Canada’s Whitecap Dakota First Nations. For the last few days, he has shared his personal experiences of inter-generational trauma caused by colonialism, and created a safe space for others to share their stories.

“If somebody has gone through a terrible situation – if that’s not dealt with then your whole life becomes about making sure that you never experience that trauma again,” Harley said.

“So what happens if you’re living in a community where something terrible has happened to everybody and this goes on for generation after generation?”

When Harley gave his account of the treatment of First Nations people in Canada, it’s almost a mirror image of the abuses perpetrated against First Peoples in Australia.

For more than a century, the Indian Residential School system removed 150,000 First Nations children from their parents. Children were forbidden from using their language. Many experienced physical and sexual abuse.

These schools were administered by churches.

Forced relocation of Indigenous families, also practiced in Australia, is known in Canada by a rather lyrical name ­– a “trail of tears”.

“Colonisation has affected almost, if not every, aspect of our lives,” Harley said.

“So many people are carrying all kinds of unresolved trauma which results in many of us just being survivors and we carry that thinking into everything we do.

“Even when you’re gathered in the name of doing something good you still carry that survival mentality into your processes.

“So when the going gets tough you turn to those ways of doing things, and it’s not about relationship and listening carefully to one another, it’s about protecting yourself.”

After some deep exchanges with UAICC members, Harley pulled out his Native American flute.

Before he played, he told the story about the instrument’s origins.

A father was away hunting when a flash flood swept through his village and his wife and children were lost.

He searched for many days without any success and was despairing and lamenting for the loss of his family.

Exhausted, he lost his voice and couldn’t even cry or mourn any more.

As he was lying on the side of the river he heard a mournful tune coming from a branch on a cottonwood tree.

A woodpecker had pecked holes in the branch and the wind was blowing through it, making a mournful beautiful sound.

Harley told the conference that when we’re full of lament and exhausted from our pain, the creation around you will support you in its own way, mourning for you and with you.

As he played the flute, the melancholic notes drifted across the conference hall, a soft echo of sadness spanning continents and centuries.

It’s as though the UAICC members knew the songline, and the flood of stories begins.

Amid the pain is resilience and hope for healing.

As one storyteller said:

“I go back empty not having to take back what I’ve been carrying for long years now.”