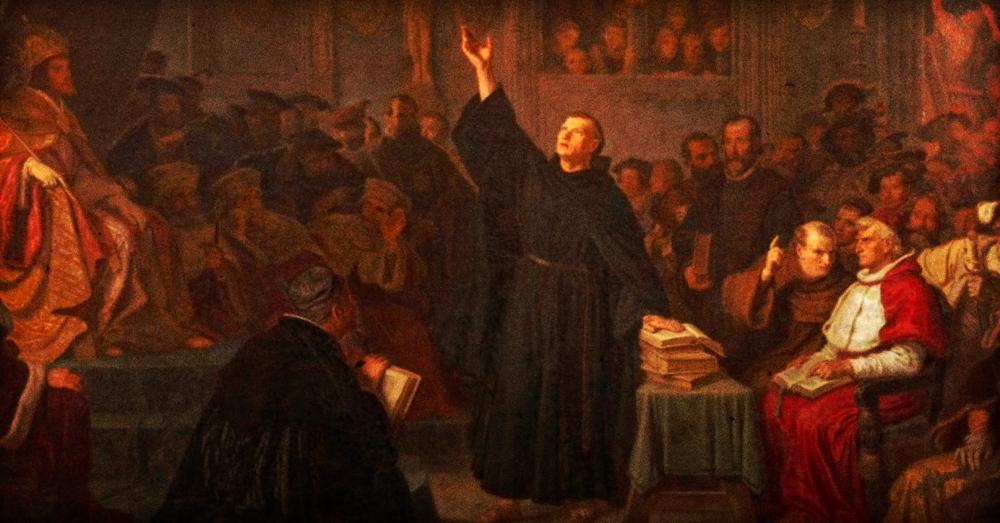 Martin Luther has been feted, condemned, discussed and studied more than usual this year as 31 October marked the 500th anniversary of the beginning of the Reformation.

Like any part of history, there are both myths and facts which capture the impact of this great Christian reformer.

Many historians now say Luther’s famous nailing of 95 Theses to the door of the Wittenberg cathedral is one such myth. What is a fact, however, is that Luther began a revolution in the Western Church, leading to a schism which broke the hold the Roman Catholic Church had on Christianity. As a result of his actions, and the influence of other key voices such as Jan Hus, William Tyndale and John Wycliffe, the Protestant revolution began.

The Uniting Church and its predecessor denominations would probably not have come into being if not for the actions of this German Catholic priest who dared to question the rituals of his church, to publicly critique the Pope, and bring the Bible to the masses.

However, the Reformation did not begin solely because of Luther’s actions. Presbyterian and Congregationalist churches are more likely to credit John Calvin with its beginnings.

Rev Dr Jason Goroncy is a Uniting Church attendee and senior lecturer in Systematic Theology at Whitley College. He feels it is important to recognise the significance of influences other than Luther in the contemporary Uniting Church.

“It is Geneva and not Wittenberg that is the UCA’s real grandparent here, at least for those parts of the UCA’s DNA that are Congregationalist and Presbyterian in origin,” Dr Goroncy said.

Rev Dr Geoff Thompson, coordinator of studies – Systematic Theology at Pilgrim Theological College agrees that it is important not to idealise Luther or this period in the church’s history.

Dr Thompson believes that the UCA “appropriates the Reformed tradition not by allowing that tradition to define us, but by ‘continuing to learn from’ it (as expressed in the Basis of Union)”.

So what can the 21st century church, and in particular the Uniting Church in Australia, take from Luther? How has the church changed in those 500 years, and what might the next reformation look like?

The term reformation is an all-encompassing descriptor for the major religious changes that, beginning with Luther, swept across Europe, heralding seismic shifts not just to the state-sanctioned Church, but also to politics and society.

While Luther is credited with lighting the spark that led to the Protestant Reformation, historians today describe multiple reformations during the 1500s, a time of significant persecution as individuals and dissident groups challenged the status quo.

Dr Thompson said there was already a huge foment in the Catholic Church at the time, with vast amounts of agitation for renewal. However, what made Luther different was that he was prepared to challenge the authority of the Pope.

“It wasn’t simply because he had the courage to stand up to the Pope,” Dr Thompson explained.

“He was driven by a set of deep theological convictions, particularly around justification, so I think clearly he was courageous, if not belligerent, because of these convictions.”

Dr Goroncy believes that we are indebted to Luther and his writings, as these were key in giving the first generation of Protestants courage and another way to articulate their faith.

“Luther, like all of the magisterial reformers, had a strong commitment to the freedom of the Word of God, to do its own work, in its own way, through its own mechanisms, by its own means, in its own time,” Dr Goroncy said.

What does Dr Goroncy mean when he says that the UCA’s real grandparent is Geneva rather than Wittenberg?

Churches and governments across Europe were extremely hostile to this early uprising, and the humanist John Calvin, like many others, was forced to flee his home country, in his case France, for friendlier soils. It was during his time as a minister in Strasbourg, and then in Geneva, that his theology began to emerge.

According to Dr Goroncy, the basic tenets of the reformed tradition stem from Calvin’s experience as a refugee.

“In Lutheranism you’ve got essentially one document that binds all Lutherans together. It’s called the Augsburg Confession. Regardless of whether you’re living in Antarctica or Tokyo or Berlin, you have one document, one confession, that binds you together. That’s what makes you Lutheran,” Dr Goroncy said.

“Whereas the Reform tradition was committed, right from the outset, to creating local confessions that were culturally and ethnically unique in some ways.

“There is a sense that every local church, every local community, had a responsibility to hear and to interpret and to articulate the word of God for itself.”

Dr Goroncy sees this aspect of Calvinism being played out in the Basis of Union.

“I think that the Basis of Union is probably the best contemporary example we have of a Reformed confession,” he explained.

“But there still remains the question of whether it is incumbent upon each congregation, each presbytery, and certainly each generation, to articulate its own hearing of the Gospel from its own place?”

Dr Thompson believes the Calvinist tradition brought ongoing reformation to protestant churches which sprung up in its wake.

“Giving churches the freedom to be self-critical actually sows the seeds of the church being able to more easily divide than it might otherwise,” he said

“So it’s an odd situation we are in.

“On the one hand, we want to affirm a particular element of the reformation – that the church learns how to be critical of itself – but that same willingness can lead to division.”

As Dr Thompson reflects on the concept of the splintered church and whether there is need for a new reformation, he focuses on the story of the Uniting Church as an example of churches being able to overcome their divisions.

“How does it do so?” Dr Thompson asks.

“It did so by returning to the basics of the faith, and I guess confronting the splintered church today; the challenge is to make sure that we don’t divide over things that are secondary.”

He believes the predecessor churches – the Presbyterian, Congregational and Methodist –allowed the secondary to become primary, and the Basis of Union sought to return the newly formed Uniting Church to the foundations.

“What the Uniting Church learns from the Reformation is the primacy of Christ. We can only confront this splintered reality of the church by confronting ourselves with the primacy of Jesus Christ,” Dr Thompson said.

“Will that guarantee overcoming splinters? No, it won’t. But I think that’s our vocation within the midst of this divided and splintered church.”

Dr Thompson is speaking of the global church, although he willingly acknowledges the splinters within the UCA.

Theology of the cross

Luther’s focus might have been the primacy of Christ, but Dr Goroncy says his view of Christ is very different to the way contemporary Australian society portrays Jesus.

“Australians have an admiration or warmth towards Jesus as a kind of ‘normal bloke’ who stands on the side of the battler, perhaps a bloke who has also been unjustly co-opted by the church for its own agendas, whereas Luther would want to say very clearly that the only place we see God is on the cross. So Luther’s Jesus is always very bloodied, very broken,” Dr Goroncy said.

“One of the things Luther might want to say to our world, and to the church in particular, is that the church has too often associated God’s work with those things which seem glorious and powerful and successful.

“Where humanity finds itself in situations at the extreme end of its tether and God appears to be entirely absent.”

As Dr Goroncy unpacks this concept, it is evident that Luther’s concept of God would challenge the way many Christians operate within the public realm today – in social media, in public debate and from the pulpit.

“The church’s tendency is always towards a theology of glory – looking at those places which seem to be so obvious, so successful, so clear that God is at work or not at work in particular places – and those are often associated with very church-centric activities.

He suggested that Christians should consider when they might have claimed knowledge of what God wants and apply that concept to the various social issues we are currently debating.

“Faith simply doesn’t live with that kind of certainty,” he said, “and the action of God on the cross robs us of that certainty.”

“This isn’t an excuse for inaction; it’s a warning against trusting in your own judgment about what is and what is not God at work.

Let everything else go

As Dr Thompson reflects on what excites students as they study the Reformation, he speaks of the power shift away from ordained clergy, which is very much a legacy of that period.

“The priesthood of all believers which came out of the Reformation is still something that touches people’s imagination,” he said.

“I think the notion of the freedom of the Gospel, the priority of God’s grace in dealings with humanity.

“That strong affirmation of the freedom of God’s grace is the most significant aspect of the Reformation for me.”

However, as we continue our musings, particularly about whether a Luther or a Calvin could bring about another reformation in today’s global, post-Christendom world, Dr Thompson believes the impact of Christianity here in Australia will be more likely at a local level.

“It will be through the formation of particular intentional Christian communities. People who see themselves called to the way of Christ and live by that locally,” he said.

For Dr Goroncy, the Reformation reminds Christians that every generation has a responsibility to keep listening and to keep trying to find language that faithfully communicates God’s Good News.

“Something from our tradition that is really strong is that no one cultural or theological consortium has a monopoly on the experience or truths about God,” he said.

“One of the strengths of this is that it’s a way to both resist the temptation to domesticate God and to confess the absolute imperative we have to remain in fellowship with those with whom we disagree, and those whom we don’t yet understand.”

As we prepare to celebrate Christmas – the birth of the Christ Child – it seems fitting to end on Luther’s words, as part of a sermon he gave on Christmas Day nearly 500 years ago:

If the sun, moon, and stars save, I can call them saviours. If St Bartholomew or St Anthony or a pilgrimage to St James or good works save, then they surely are my saviour. If St Francis, then he is my saviour. But then what is left of the honour of the child who was born this day, whom the angel calls Lord and Saviour, and who wants to keep his name, which is Saviour and Christ the Lord. If I set up any saviour except this child, no matter who or what it is or is called, then he is not the Saviour. But the text says that he is the Saviour. And if this is true — and it is the truth — then let everything else go.