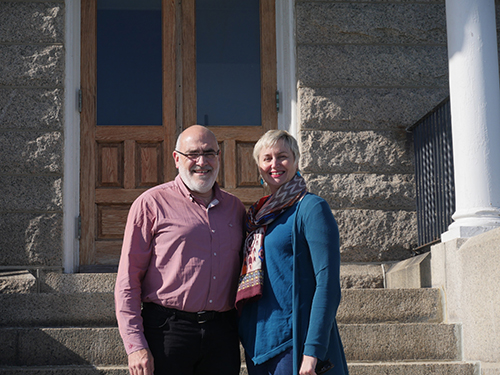 The tranquil view from the windows of neat as a pin Cape-Cod houses across to the waters of Aquidneck Island belied the topic of conversation – how Christians, and the church in particular, hold a commitment to peace-making alongside the reality of war.

I was sitting with Tim McCormack, Professor of Law at the University of Melbourne Law School. He was in Newport, Rhode Island on sabbatical as a Fulbright Senior Scholar and the Charles H Stockton, Distinguished Scholar in Residence at the US Naval War College.

Annual leave and an opportunity to spend time with the McCormack family had taken my husband and me to Rhode Island. The interview was timely due to the research already underway relating to the 50th anniversary of the Vietnam War (see August feature).

Prof McCormack is a specialist in international humanitarian law, or the Law of Armed Conflict, and in particular the use of military force, the regulation of the way war is conducted and the prosecution of war crimes. He is the Special Advisor on War Crimes to the Prosecutor of the International Criminal Court in The Hague.

As a Christian, Prof McCormack often thinks about the theological development of an approach to viewing war. He believes the concept of a just war, developed by St Thomas Aquinas and his contemporaries, is foundational to the emergence of international humanitarian law.

“Aquinas and other theologians of his time were not pacifists,” he explained.

“They accepted that in certain circumstances it might be necessary to use lethal military force to defend a civilian population or to defend a nation from invasion and aggression, but that these circumstances should be very limited.”

The concept that military intervention is an unfortunate reality of a broken world has led to the creation of rules (international humanitarian law) that seek to alleviate the human suffering brought about by war.

Prof McCormack stressed that while he is committed to the constraints international humanitarian law places on nations to the way war is conducted, such constraints are not an alternative to trying to avoid armed conflict in the first place.

“It’s important the pacifist voice is heard, because we ought to be communicating as a community to the government that there is a widely held view that a resort to war is bad,” he said.

“The pacifist voice would always say it is wrong. Whether you agree with that or not, war isalways bad because of the consequences that flow from it. In suggesting there is a difference between pacifism and peace-making, I don’t mean to communicate that I am enthusiastic for decisions to go to war. I’m actually not at all.”

We began our conversation reflecting on Prof McCormack’s first encounter with war. His cousin, Albert McCormack, was conscripted as a 21-year-old in 1966 to fight in Vietnam. He was one of the 18 young Australians who died in the Battle of Long Tan.

The funeral, a big event in the small town of Launceston, made a lasting impression on six-year-old Tim.

“Going to the funeral and seeing all these soldiers in uniform honouring the memory of Albert; the gun salute at the graveside, the coffin being carried on a gun carriage with the flag draped over it, the coffin being lowered in the ground – these visual impressions had a huge impact on me.”

Even now, 50 years after the death of his cousin, Tim McCormack meets up with Albert’s fellow soldiers at annual commemorative events. He has found that their memories of the army chaplains are very positive.

“In the midst of terrible circumstances there were people who were there explicitly as representatives of the faith. They were sharing compassion, love and understanding to people who had all sorts of trauma to deal with. How can we as a Christian church turn our back on that?”

Prof McCormack believes the public discourse around military interventions could be reframed by focusing on potential solutions to the tipping points of conflict – poverty, lack of basic human rights, ‘to helping communities become more prosperous as a strategy to avoid descent into conflict’.

Whether as a peace-lover or as a pacifist, Prof McCormack is adamant that Christians need to speak out on these issues, but he advocates especially for those with specialist skills.

“I’m a big advocate of Christian professionals, professionals who really have some subject matter expertise, identifying themselves as people of faith, rather than leaving it exclusively to the clergy,” he said.

“My view is that God cares deeply about ensuring that justice is existent and prevalent in human society. I really believe that God has called me to this role and given me the skills and the ability to perform it, and I am grateful to him for that opportunity.”

While his training provides a legal framework, Prof McCormack’s faith leads him to ask moral as well as ethical questions in relation to the law. For example, in the Law of Armed Conflict there is a notion of combatant privilege – when a soldier kills an enemy combatant while engaged in hostilities, it is not seen as a crime of murder. However, this changes once enemy combatants are wounded or taken as prisoner of war – then the law protects them from attack.

“But there is plenty of anecdotal evidence about soldiers who commit perfectly lawful acts suffering terrible mental anguish because they know exactly what they have done. And I don’t think it’s taken seriously enough,” Prof McCormack said.

“I wonder if those members of the decision-making political elite, who are so ready to support the Americans to go to war, think about the consequences of that decision, not only for victim civilian communities, but for individuals who act entirely within the law, but come home traumatised.”

As we concluded our conversation, Prof McCormack pondered whether our church institutions will learn from some of the failures they have wrought on people who have sought their care.

“My view about the Gospel of grace and of liberation and of hope is that the Church should be exceptional and we ought not to get sucked into what the rest of the Australian society does,” he said.

“We should be able to understand that there is a special need here (the armed forces), as well as in doubtlessly many other contexts and do what we can to meet that need.

“You wonder what today’s minority groups are going to say with the benefit of hindsight in 20, 30 or 40 years from now. Which of them are going to say they felt abandoned by the institution of the Church?”