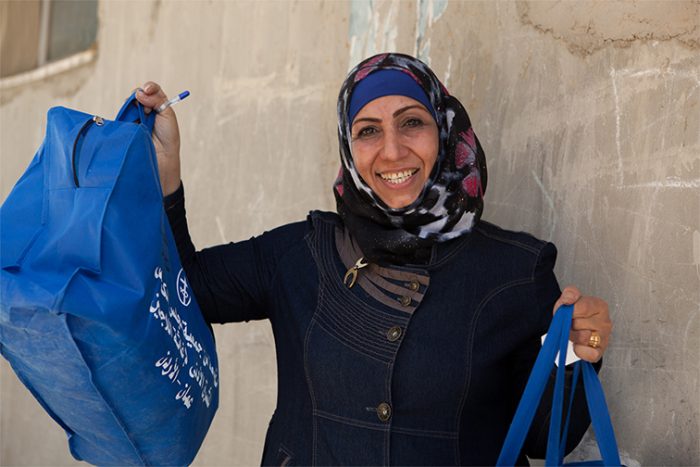 KAREN MCGRATH recently travelled to an urban refugee camp in Jordan to meet with Syrian men, women and children forced to flee their home to escape war and violence. Ms McGrath was on assignment with Act for Peace, the international aid agency of the National Council of Churches in Australia. She shared with Crosslight her reflections of life in the camps. While there, she witnessed the distribution of urgently-needed food ration packs to the Syrian refugees. Many of the packs were funded thanks to the generous support of Uniting Church members.

During my visit I learnt a lot about people’s suffering, but also about their resilience. I saw the emotional pain people were experiencing, the terrible living conditions their desperate need for food, medical treatment and other kinds of support.

Despite having lived through such grief and trauma, the people welcomed me in to their homes and shared their stories with me. A family described how they’d fled from their house in the night as bombs flew towards them, a woman told me how she’d lost her sister and unborn child and two young boys described how they had lost their dad.

One question I asked was: “What did the war take from you?”

These heartbreaking responses caused me to reflect on just how much the war in Syria has impacted ordinary mothers, fathers, sons and daughters. After five long years, the conflict has come at an unconscionable human cost.  People fleeing violence have lost not only their homes, livelihoods, family, friends, but also their dignity, safety and basic human rights. After all they have been through, many of the amazing men and women I spoke with are still determined to help others in need.

Fatima is a proud and strong woman who volunteers to distribute food aid to fellow refugees in Jordan “with love and a smile”. Though she says she will never forget the humiliation and powerlessness she felt when she first became a refugee, the war hasn’t taken away her smile.

Fatima was forced to flee Syria three-and- a-half years ago, and now lives in Jordan with her children. With more Syrian refugees arriving every day, Fatima says that life is hard and resources are becoming scarcer.

“We mainly depend on coupons and packages distributed by NGOs,” she said. “They’re getting fewer all the time. So we are trying to adapt. We no longer have breakfast, the children just have milk.

“I never thought this would happen to Syrian people who were living in prosperity and dignity.”

Fatima is grateful to the people in Australia who helped to train her and the other volunteers she works with.

“I thank the Australian people and I am always praying for them because they gave myself and all Syrians great hope,” she said. “We will always pray for you and for your country to never suffer what we have suffered from.”

We have become used to seeing news headlines full of statistics about the Syrian conflict, and the numbers are so huge they’re hard to get your head around. But I hope that by sharing the story of ordinary people living day to day in Jordan, I can communicate the suffering caused by the crisis at a human level. At a level we can all actually understand.

To help raise money and awareness for refugees, Act for Peace is calling on compassionate people around Australia to take part in the Ration Challenge.

The Ration Challenge takes place during Refugee Week, 19-25 June. It challenges compassionate Christians to live on the exact rations that a Syrian refugee living in a refugee camp in Jordan receives for one week and get sponsored to do so.

Thousands of caring people have already signed up. The money raised will help provide refugees with food, medicine and psychosocial support. But more importantly, by taking a stand, participants will show refugees they are not alone; there are people in the world who care.