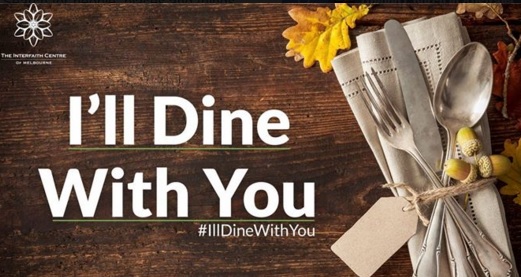 Melbourne’s City Square will be transformed into an open-air dining experience next Monday to celebrate Australia’s religious diversity.

I’ll Dine With You is an interfaith, intercultural event that encourages dialogue between people of different faiths. Guests will sit at an 80-metre dining table and exchange conversations over food.

The event is organised by the Interfaith Centre of Melbourne and is sponsored by more than 20 religious and cultural organisations including the Uniting Church. Other sponsors include the Islamic Council of Victoria, Faith Communities Council of Victoria, Jewish Community Council and the Victorian state government.

April Robinson is Interfaith Network Developer for the Uniting Through Faiths unit of the synod. She is also on the organising committee for the event.

“Over seven months ago, at the Islamic Council of Victoria Women’s Iftar, we discussed the idea of an interfaith/intercultural dinning ‘spectacle’,” Ms Robinson said.

“A couple of hundred people seated at an 80-metre dining table, in the middle of the city, eating and talking together. We want to show the vibrancy of Victoria’s multiculturalism.

“This is an important event which has finally come to fruition; food and humanity are the common denominator. We are proud to sponsor the event, and Uniting Through Faiths is proud to have been on the organising committee for this spectacular event.”

The event name was inspired by the #illridewithyou hashtag, which was born in the aftermath of the 2014 Sydney siege. Australians took to social media to express solidarity with their Muslim neighbours and many offered to ride public transport with people who felt intimidated by anti-Islamic sentiment.

Islamophobia continues to be a serious issue in Australian society. Earlier this month, an Islamic centre in Preston was vandalised, causing hundreds of thousands of dollars in damage.  Obscene graffiti was sprayed on the walls and copies of the Koran destroyed.

I’ll Dine With You aims to break down cultural and religious barriers by embracing a spirit of tolerance and friendship.  It is an opportunity to counter fear, prejudice and division with respect and open-mindedness.

The event takes place on Monday 29 February at City Square (corner of Swanston and Collins Street). Registration opens from 6pm and dinner will begin from 6:30pm to 9pm.

The dinner includes a three-course vegetarian meal. Attendees will also be treated to entertainment from special guests. Tickets can be purchased online and are $25 each ($20 for students/concession).