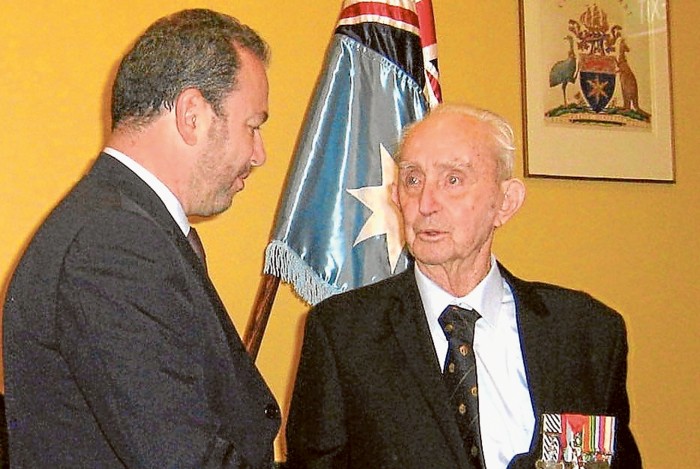 Former World War II pilot George Flack denies that he is a hero – but the people of France disagree.

In December last year the 93-year-old was presented with the Legion of Honour, France’s highest military award, for his participation in liberating France from the Germans.

Mr Flack flew more than 40 flights over France, sometimes in horrendous conditions, between 1942 and 1945 to halt the Germans advance through the country. It was at a time when many pilots were lucky to survive a handful of missions.

But, for Mr Flack it was just a case of doing the job he was assigned.

“I was just doing what I was told … doing my job. I did not think I was doing anything special,” Mr Flack said.

Mr Flack – a resident at Uniting AgeWell’s Strathdevon facility at Latrobe on Tasmania’s North-West Coast – was presented with his medal by France’s Ambassador to Australia, Christophe Lecourtier at a moving ceremony in the Hobart Town Hall.

Mr Lecourtier described Mr Flack as more than just a fighter but a liberator.

In a letter of congratulations to Mr Flack, the secretary of the Department of Veterans Affairs, Simon Lewis, said the Legion of Honour was one of the world’s most widely recognised honours having been established in 1802 by Napoleon Bonaparte.

“The rigorous process in identifying these individuals, especially in countries as far away as Australia, ensures that the recipients are indeed deserving,” Mr Lewis said.

The achievements of Mr Flack, who also received a Distinguished Flying Cross for his service, would never have happened had it not been for a passion to follow in the steps of the aviation pioneers of the turn of the century.

Following the war Mr Flack spent many years working at the Mt Lyell mine on Tasmania’s West Coast.