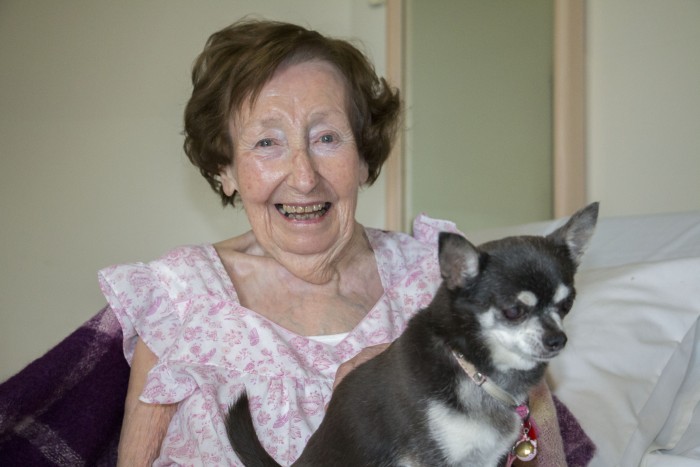 A resident at Uniting AgeWell in Forest Hill has been reunited with her beloved pet Chihuahua just in time for Christmas.

Eighty-eight-year-old June Wright and Saffi (pictured) kept each other company for 14 years until June moved into the Strathdon Community and could no longer look after her ‘bubba’.

Saffi was initially taken in by a neighbour, but after just a few weeks they were unable to care for her and took her to June’s vet to be looked after.

Keen to ensure June could still see her best friend, Strathdon put out a call to staff to provide Saffi with a new home.

Donna Jones, an activity worker at Strathdon’s Mingara Day Therapy Centre, took up the call for action and volunteered to take Saffi in and join her family of two cats and a West Highland white terrier.

Knowing the joy pets can bring older people, Donna takes Saffi to work with her four days a week so she and June can spend time together.

“I know how much Saffi means to June and, with my role at the Day Therapy Centre, I am able to bring Saffi in with me four days a week so they can still be together during the day.

“The bond between June and Saffi is incredible, it warms my heart every morning when I take Saffi to her and see the reaction between them.”

The pair now spends about four hours a day together, playing and interacting.

“Saffi has settled in very well both at home with my other pets and with the residents at Strathdon,” Donna said.

“Having Saffi at Strathdon not only brightens June’s day, everyone seems to love her.”

Strathdon was fortunate to receive a $1000 grant from Animal Welfare League Australia to help with Saffi’s expenses.