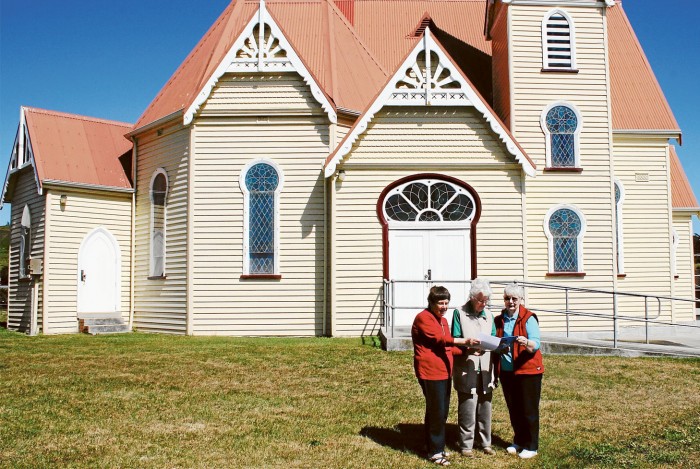 For almost 150 years the Penguin Uniting Church has worshipped on the same spot opposite the Bass Strait foreshore of the small north-west Tasmanian town.

In that time the church has become an integral community landmark and a beacon for many events and gatherings, both large and small.

Engaging with the community and other churches has been integral to the church’s life ever since the Methodists first built on the site in 1866.

The first Methodist service in the town dates back to 1864. It was held in the home of Mr John Merelie Smith only three years after Penguin was first settled and 11 years before the township was actually proclaimed.

Penguin UC will celebrate its 150th anniversary of continuous worship on the site with a day-long celebration on 17 January starting with a street parade and culminating with an afternoon tea. Moderator Dan Wootton will preach at a 10.30 am sesqui-centenary service.

The original Methodist Church was used by the Primitive and Wesleyan Methodists for some years until the Primitives built another church up the road on Mission Hill.

In 1901 the two churches re-joined and built a new church on the Main Street site occupied by the Wesleyans to cater for the growing congregation. The current church was officially opened two years later and the original church was moved to the back of the site and used as a Sunday school before being destroyed in an arson attack in 1904.

A newspaper report at the time praised a Mr FH Fielding, who rushed into the burning building to remove the organ while others removed pews.

Fortunately, the brave efforts of rescuers saved the new church from sustaining any damage with men being doused with water to allow them to continue to protect the building.

“During the progress of the fire a bevy of young ladies formed themselves into a temporary brigade and mounted the roof of the house of Mr Ellis, the next house to the church, and extinguished all sparks as they fell on the (roof) shingles,” the newspaper reported.

The newspaper report made it clear the newly-constructed federation church was also a target of the arsonist.

“It is evident the incendiarist (sic) intended the larger building to burn as a box containing shavings and oakum (a blend of fibres coated with tar and used to fill small cracks in buildings in the early 20th century) was discovered close to the back of the building near the gas pipes, with a piece of lighted candle in it covered with shingles leaning against the building as if to conceal the light. No stronger evidence of incendiarism could possibly be found.”

Many of the current congregation can trace roots back to the founding members of the church. Mary Brain proudly dates the history of her paternal family, the Barkers, to the late 1800s.

Retired minister Bob Hazeldine said the church, which has an average Sunday attendance of about 50, had always played a pivotal role in the life of the town.

“The church is used by church groups and local groups making it very much a community church,” he said.

“It is a focal point in the town.”

The church’s sense of mission has remained, not only to its local community but also to the wider world. It is a financial supporter of chaplaincy services in local schools and has actively supported agencies such as Frontier Services and Operation Christmas Child, an appeal organised by Samaritan’s Purse Australia.

Its annual Easter Sunday Dawn Service on the waterfront, followed by breakfast in the church hall, is a key ecumenical event in Penguin and a Blessing of the Animals service is held every second year by Mr Hazeldine, attracting not only domestic pets but the odd goat and even a wallaby.

The church also holds special services to recognise the role played by emergency services and service clubs in the town.

Ecumenicism has always been a feature of Penguin Uniting and that includes allowing Dutch migrants to use the building on Sunday afternoons after World War II for worship until they built their own church.

9.30 am: Parade of people in historical costumes with a vintage car

12.30 pm: Luncheon including viewing of historical display in the hall