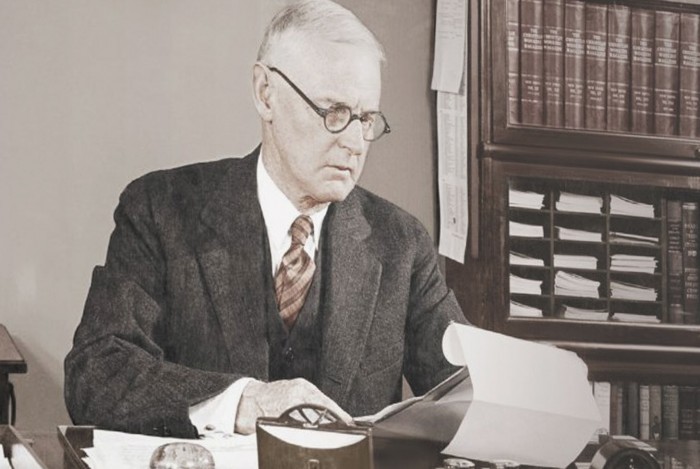 Gloege’s Guaranteed Pure sets out to establish how American business culture in the late-19th century became an essential element of middle-class Protestantism. In effect, the author is tracing the roots of contemporary America’s religious identity.

Guaranteed Pure claims that at the base of what is termed ‘corporate evangelicalism’ we find – Quaker Oats cereals?

It all seems very unlikely, but Gloege has chosen a fantastic subject to explore.

Henry Parsons Crowell enters the proceedings after Moody’s death, lending business acumen to the Moody Bible Institute (MBI) and transforming it into a commercial enterprise.

All told the book traces the development of this new approach to religion, very much a reaction to the labour unrest of the time and economic depressions, between the years 1870 to 1920.

Moody’s life and the road that led him to founding the Chicago Evangelization Society (renamed the Moody Bible Institute after his death in 1899), makes for interesting reading and has been well documented elsewhere. Gloege’s task is to establish how this man’s influences paved the way for Crowell’s appearance on the scene.

An early life of financial struggle as part of a large family and an escape from poverty through excelling at sales in Chicago, informed Moody’s perspective on religion. Distrustful of theological jargon, he instead addressed Bible study groups and meetings in his own working-class speech.

Though Gloege observes his outspoken nature met with resistance early on, Moody ingratiated himself with respected members of Chicago’s business circles. They would even sit behind him on stage when he addressed the growing crowds at his revival meetings. This visible endorsement cemented Moody’s association of business methods and structure with a personal interpretation of how God exists in this world.

“I believe we have got to have gap-men, men to stand between the laity and the ministers,” he is quoted as saying, which clearly informed his concept of what would become the MBI. Fellow revivalist R.A. Torrey – who led a large meeting in Melbourne in 1902 – went so far as to profess a belief that he had a binding contract with God that his faith would be rewarded with good fortune.

Again and again, Gloege establishes how the economic insecurity of the age influenced the development of faith – particularly this non-denominational concept of a ‘personal relationship’ with God. This strongly indivualised stance was sufficiently generalised to give Moody a popular push in his leadership, but also gave rise to the likes of faith healing.

Crowell’s belated arrival in the text marks a shift in the discussion. Gloege reiterates his concept of ‘corporate evangelicalism’ and tells the story of how Crowell’s oats company created an association between a brand logo of a Quaker and an organisationally unaffiliated product.

Crowell’s true value to the MBI was his ability to provide the leadership and purpose it had been deprived of with the death of its founder. Intent on establishing the Institute’s middle- class bona fides and respectability – in short, by making the MBI profitable and leaving behind its doctrinal clannishness – Crowell masterminded the publication of The Fundamentals, a 12 volume correspondence series. The MBI, however, was also openly hostile to more liberal theology, such as critical interpretations of the Bible.

The fraught class-warfare of Moody’s time still informed his legacy.

Gloege’s history covers a broad area, with much tantalising detail alluded to, but the execution falls short. Crowell’s entry marks the point where the premise of the book becomes muddier, the exhaustive tracing of Moody’s own life and times giving way to dry administrative struggles within the MBI.

Ironically it is exactly at this point that the meat of the matter is introduced, with Moody’s philosophy of a Christian worker – one loyal to the corporation instead of trade union rhetoric – an essential aspect of MBI teaching and enshrined by the orthodoxy of Crowell’s The Fundamentals.

The book also suffers from a confusion of language, with academic speech giving way to theological reflections – not to mention the digressive asides that open most chapters. Historical figures enter the proceedings like new characters entering the plot of a novel.

It is ironic that Guaranteed Pure is so stuffed with jargon given Moody’s views on theology. For instance:

“Moody’s death marked the end of respectable evangelicalism’s hermeneutical innocence, when a ‘plain’ meaning of the Bible could be embraced, at least ostensibly, without concern of negative externalities,” is close to unreadable.

There is an intriguing suggestion that revivalist religion became twinned with American business in the late-19th century. This was when  the concept of the godhead as relatable, as well as the legal personhood of the corporation, both surfaced. However, Gloege largely does not expand on that, or on how his concept of corporately inflected religion developed into the American century. Guaranteed Pure feels like a primer on how branding helped establish religious orthodoxy – but this is a claim asserted, rather than proven, by the author.