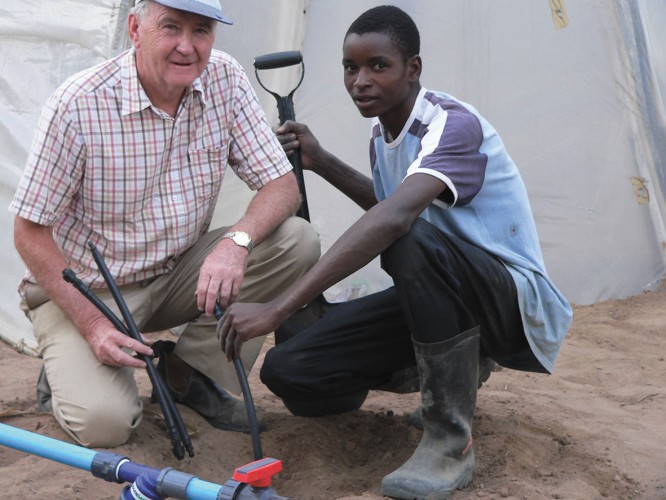 When Mark Edmonds (pictured left) left his busy corporate job he could have been forgiven for settling quietly into retirement.

Having spent the better part of 10 years living as an expat while working for the National Australia Bank in branches throughout Asia, he and wife Karen moved to Seville, in the picturesque Yarra Valley south of Melbourne.

They joined the local Wandin Seville Uniting Church and were kept busy with their six acre hobby farm.

But, as Mark explained: “You can only drive a tractor around in circles for so long.”

When a volunteer role became available at Vision Fund (the financial arm of World Vision), it wasn’t long before Mark was packing his suitcase and heading for the airport.

“While I was working in Asia I saw a lot of fraud and corruption and it really irked me,” Mark said.

“I thought one day, when I retire, I’ll try and do something about it. I know one person is not going to change the world but every little bit helps.

“I’ve had a good life and I’ve always been a bit of a sucker for children. I think kids should have a better life than their parents, whether they grow up in Africa or Asia or Australia.”

Mark’s background in credit and risk management proved invaluable to Vision Fund. They needed someone to oversee policies and procedures of their micro-finance initiatives throughout the developing world.

Mark’s role took him to Mongolia, Cambodia, Sri Lanka, Montenegro, Serbia and Rwanda. He would often be away for a month at a time, returning for a week only to head off again.

When World Vision offered the role to Mark as a full time position, he suggested they look for someone else. “I told them I was past my use-by date to be working full time.”

Although Mark might not have been working full time, he certainly hasn’t been idle since leaving his volunteer role at World Vision. A church newsletter asking for volunteers with UnitingWorld has led to a variety of overseas trips and adventures, as Mark has travelled the world sorting out financial issues for relief efforts, business ventures and building projects.

While the focus of Mark’s work has been financial, he speaks with passion of the people he has met, the friendships formed and the ‘incidental’ difference he has made throughout his travels.

One memorable encounter came about through a chance meeting with a recipient of micro-finance in Cambodia.

The woman was running a successful business making fishing-nets. When Mark visited he happened to notice her son, who was born with a debilitating deformity. After a few enquiries, Mark realised the deformity could be rectified with proper treatment, so set about organising a life-changing operation for the little boy.

“For the cost of $1000, it changed the kid’s life,” Mark said. “I’ve kept in touch and been back to see him a couple of times, he is just a normal kid running around.”

Given Mark’s love of children, it is little wonder that his last overseas trip made such an impact on him.

Sent to Zimbabwe to advise the Methodist Church on a building project, he was asked if he would mind visiting the local orphanage, which was losing a lot of money. 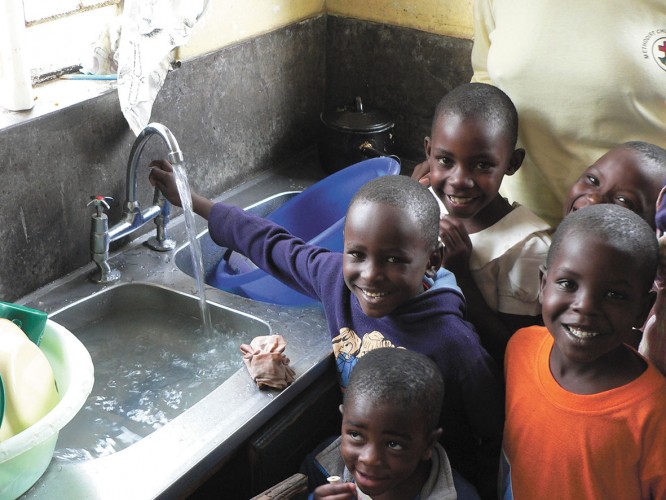 The Matthew Rusike Children’s Home (MRCH) in Epworth, Harare was built in the 1960s to care for orphaned children. Children live in residential units, each with a ‘house mother’ who cares for approximately 10 children ranging in age from a few months to 16 years old.

“It wasn’t hard to see why the orphanage was losing money,” Mark said. “The maximum capacity was 100 children and they had 150 children.

“Because the government is broke, they have stopped subsidising the orphanage. These poor kids didn’t have a lot to eat and there was no water, they were carrying water from a well.

“It churned me up a bit and I thought I’ll come back and see what I can do.”

Although it was easy to pinpoint the financial issues, Mark was also able to identify areas where he could be of practical assistance. Having spent his childhood on a fruit farm, Mark decided to raise enough money to return to Harare and help to establish a vegetable garden. The main issue facing the orphanage was lack of irrigation; water had to be carried by the children from a well.

“So I set about raising the money. In the end we got US $39,000. Eleven thousand of that came from UnitingWorld, 7500 from the Methodist Church of Zimbabwe and the rest I raised by speaking at a couple of functions. All the places I’ve been to I’ve always written about them and given them to friends, who said if ever you find something where you want to spend some money for a good cause let us know. So I wrote about the orphanage and said read this story and they said ‘yep, we’re on board’.

“I drew up what I wanted to do with tanks and lines and pipes and the local plumber, who is a member of the Methodist Church over there, came on board. He had his team put the copper pipe in and he plumbed the dormitories. I did the vegetable garden, which is 8500 square meters. There’s over a kilometre of piping to the dorms, a new well and about three kilometres of drip hose.

“They’ve got thousands of vegetables growing now and more importantly – the kids can turn the taps on in the dormitories and water comes out. Since I’ve got back I’ve had a couple of emails from the accountant at the orphanage and the gardener is going great guns.

“I told him if he does that I’ll come back and put the water on to two acres next to the piggery. That won’t take much and UnitingWorld has said they will pay my airfares over if I raise the money to do the second lot.”

Not only is the orphanage growing enough to feed the children, they are now selling excess produce. Mark recently received an email telling him that more than US$19,000 of income had been generated since April this year.

While Mark is proud of the work at the orphanage, he wants to point out that anyone, no matter their background, has skills they can offer.

“There are thousands of opportunities for people out there who want to volunteer,” Mark said “A lot of it is common sense. It doesn’t matter whether you are a school teacher, a bank manager, an accountant or whatever, once you get in there and they know you are educated, they pick your brain. Most people just want to soak up all the information they can.”