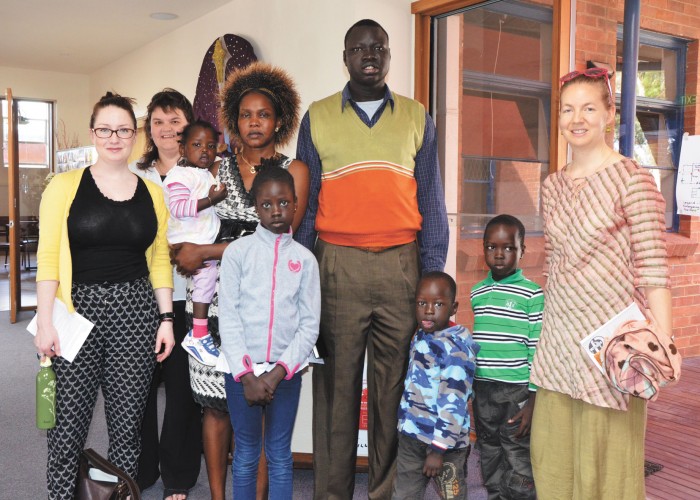 Towards the end of last year I had the privilege of accepting an invitation from the Swan Hill Uniting Church to visit their church and community programs.

Our group travelled to Swan Hill for quite a few reasons. I had been there a few months before to meet up with Jill Pattenden and see the work being done by the local social justice group.

Paul took the adventure with us to make some connections with the South Sudanese community.

Many people would be surprised at the number of asylum seekers who have been put on the train to Swan Hill. Once the asylum seekers arrive, with whatever meagre possessions they own, they are then reliant on the assistance of others to help them.

During our weekend, we met many of the asylum seekers living around Swan Hill. These men are some of the most disadvantaged by current Australian refugee policies and practices.

Often recently-released from community detention, they rely on each other for support, as well as community groups like the Swan Hill social justice group.

While there was a great amount of generosity between the community group and asylum seekers, I can’t help but wonder how abject many of the people must feel. The loss of dignity and identity, lack of language, customary knowledge, geographical boundaries and, most of all, family is hard to fathom.

The incredible work done by the social justice group is imperative to the lives of those they help, but to be in a situation where one must rely completely on others must be very difficult.

We arrived late Friday evening, to be ferried off to the homes of our hosts who kindly put us up.

We then had the pleasure of being a part of a ‘Welcome’ night which, when funding permits, is a regular event held at the local Catholic hall. All of the newly arrived asylum seekers get together for a meal and practical instructions.

Arriving at the hall, we got straight into it, chopping up the fruit and veggies to put on the tables, while more and more people started to trickle through the door. Approximately 90 Hazara men filled the hall, which was a great turnout. After sharing a meal, the men listened to practical advice from a firefighter, a refugee nurse and a driving instructor.

Saturday afternoon was spent with the social justice committee, sharing their concerns, passions and how they support the synod’s actions and campaigns.

We were joined by four of the Afghani men over lunch, which gave us more time to sit together and share stories.

Even though I know the statistics and I believe in the right to seek asylum, standing so close to someone and seeing their story etched into the furrows of their brow made the stories I hear on the daily news very real.

I could talk about the injustices of global and national politics all day long, the push and pull factors for refugees.

I could feel empathy for the stories I hear on the news, and feel grateful for the practical work which has become so important; finding homes, a bed and clothes for those who literally have nothing and limited access to welfare.

It is a privilege to meet someone who is willing to share the personal and painful stories of their life. The family they left, their journey here, reinforces my inherent privilege of being born in the right place at the right time.

Swan Hill doesn’t generally produce visions of a multicultural melting-pot. Although it has a history of immigration after World War II, most people I talked to in Melbourne have no idea of the many cultures inhabiting the beautiful banks of the Murray.

The incredible diversity that now peppers the streets brings colour, spice, worship and community – the beautifully coloured hijabs worn by the women down the street, the aroma of exotic spices emanating from the Asian spice shops, the celebration of Ramadan, Muharram and Ashura at the Uniting Church Hall and the coming together of many Swan Hill community members to support whoever needs it.