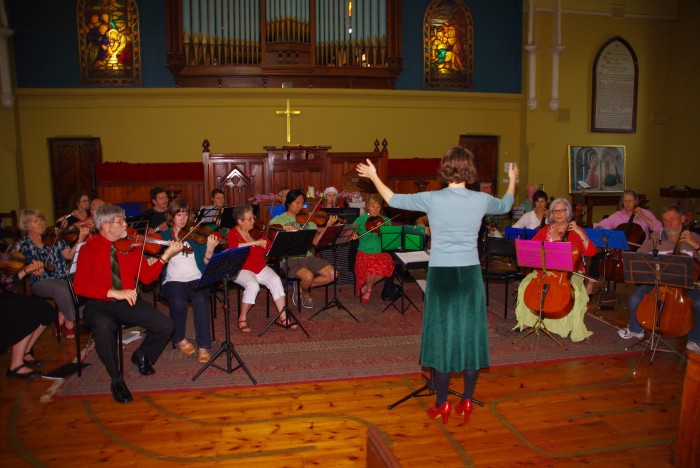 Peter dabbled with fame when the adult orchestra he performs with (above) appeared on the ABC’s Spicks and Specs.

If a film maker was looking to cast the part of a kindly, wise village vicar, they wouldn’t go far past Rev Dr Peter Blackwood. With a gentle, thoughtful manner, for the past four-and-a-bit years, Peter has been the go-to person for many synod staff in search of counsel, guidance or just some friendly advice.

Just a few weeks after his retirement from working life, the former associate general secretary of the Vic/Tas synod has agreed to discuss his life in the church.

As we chat, it becomes apparent that Peter’s faith is literally part of his DNA. The third-generation minister was even named after the church in which his father served – St David’s Presbyterian Church in Newtown (David is Peter’s middle name).

“I went to Geelong College, a Presbyterian school. When I was about 10, Dad got a call to Warrawee in Sydney which was just around the corner from Knox Grammar, again a church school.

“Even the scout group I joined was the congregation scout troop. So from the time I was born I had that whole, total immersion, if you like.”

After spending time as a teacher in his 20s, Peter’s strong connection to the church – particularly the Uniting Church – was reinforced further when he graduated from the United Faculty of Theology.

“I was ordained at the end of 1977 which was just after Union. So there was a bunch of us who graduated about that time. It was a fascinating time, a wonderful experience.

“My family were always very much Uniting. There were two Basis of Unions drafted. The first one was ultimately rejected, but I can remember my dad talking about what the church would look like under that Basis.

“Ministers would not be called ministers, they would be Presbyters. That’s my main memory of what he said.

“I don’t know whether those who planned and did the hard yakka for the inauguration of the Uniting Church intended that the Basis of Union would do anything more than give us a document that would get us going.

“It amazes and thrills me that the Basis of Union is still the foundational document we go back to, to keep us on track.”

Peter acknowledges that, for many people, the formation of the Uniting Church was a difficult time. While his family were in support of Union, he says some traditions did take time to adjust to.

“I hadn’t realised how Scottish the Presbyterian heritage was. Going into the Uniting Church, it really felt like we were coming into an Australian church.

“Things that we had taken for granted were celebrating St Andrew’s day and the Hogmanay, the Scottish flavour to New Year’s celebrations. I went to a school that had a pipe band, the cadet unit was a kilted unit, so all that was part of the heritage.

“But in the Uniting Church we needed to leave that behind. We needed to leave our hymn book behind. The Australian Hymn Book was timed to publish in 1978. To learn that hymn book where the other had been so familiar was a bit tricky.”

Peter’s first placement as minister was Burwood Heights where, of the three worship centres, two were ex-Methodist.

This continued throughout his ministerial placements, where the Methodist tradition was often stronger than the Presbyterian.

“I learned to appreciate that the heritage of Methodism was something to be proud of. For an old Presbyterian to say that is saying something.

“In fact there are aspects of Methodism that I rejoice in.

“It wasn’t an establishment church, whereas the Church of Scotland was. Prior to Union, when the Queen visited Australia, on Sunday she would either be in an Anglican Church or a Presbyterian Church, because both are establishment and in Scotland she is Presbyterian. My politics, my ecclesiology, it’s all moved away from that.”

Reflecting on his life within the church, Peter is the first to admit that it was odd he should end his working life at the synod. He says he loved his time as a congregational minister, particularly the conversations and the pastoral care.

Very early in his life as a minister, he learned that one of his strongest skills was the ability to hear what people were actually saying.

“That has been the basis of my pastoral work, learning to listen.

“One of the things I learned is that people will only ever take their own advice. So how do you have a conversation that helps them advise themselves?

“What I was well trained in is how to have pastoral conversations, what I wasn’t really trained in was counselling. I would enter into conversations to help decision making and part of that was ‘what are the options?’. People usually know what the right option is for them.”

Although Peter was approached many times to move into other roles within the church, he resisted until he felt the time was right.

“I love congregational ministry, particularly the liturgical side of it and the big celebrations – Lenten, Passion Tide, Easter. And Christmas is the highlight of the year.

“But there was a point after one Christmas that I thought ‘I still love this but actually I could let it go’.”

After a stint as a presbytery minister, Peter took on the position of associate general secretary.

He is the first to admit that, at times, the past four years have been incredibly challenging, particularly when he had to temporarily step into the role of general secretary. Peter refers to the late-Peter Ustinov, who, when asked about his time during the war said “it was just awful but I wouldn’t have missed it for the world”. Peter said he can relate to these sentiments.

“The eight months as general secretary was the slowest time of my life. And when some of the crises came along it was amazing. Some of the heads of departments weren’t there so it fell to the 2ICs and they performed so well.

“Not only that but even though their bosses were on holidays or overseas they were still supporting them.

“It’s extraordinary that can happen in an organisation such as ours.”

It is the relationships he formed while working at the synod that will stay with Peter.

“The delightful bits are the people you are working with and who are supporting you in it, that was the best bit.”

He says he was also glad to have attended the last Synod meeting.

“I think that was a most memorable Synod for all the right reasons.

“How terrific that difficult conversations, like the one at Synod, can be had in a safe, respectable way. The passion that was evident was all because of the love of the church.

“I really think we saw the church at its most vulnerable and at its best.”

To describe the past few years as busy would be something of an understatement. Speaking with Peter it is clear that he is looking forward to stepping back and taking a breath. He and wife Sue have plans to travel and spend time with their five grandchildren. Peter says he is even starting to do housework, and recently did the cooking for a family celebration.

For those who work in the synod building, it has been odd not meeting Peter in the lifts or corridors. It seems that for Peter, the adjustment might be easier to make. As he tells me: “I’m in the process of putting a new lifestyle into place.”