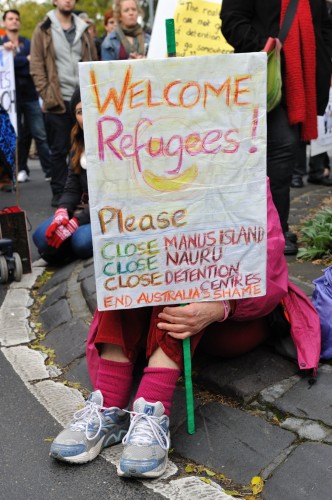 Melbourne was the first Australian city to celebrate World Refugee Day, which began with a protest to free more than 1600 children held behind barbed wire and a call to end mandatory detention. The rally coincided with the Multicultural Arts Victoria’s Emerge festival, which celebrated its 10th anniversary.

The festival is part of the United Nations World Refugee Day and commemorates emerging artists who have recently settled in Australia. While the festival was packed with music, food and colour, the message was raw. Say it loud, say it clear, refugees are welcome here.

The rally featured several banners and signs, including a boat with young children inside. This signified the dangerous route asylum seekers, some with children, take to come to Australia. Young kids, mostly on their father’s shoulders, chanted whole-heartedly “free, free the refugees”.

Campaign coordinator for the Asylum Seeker Resource Centre, Pamela Curr, led the rally from Melbourne Museum to Fitzroy Town Hall. She said it was a ‘joy’ to be among these vibrant people.

“There is a representative from every culture here and it’s wonderful,” she said.

Numbers were down to 600, compared to 1000 last year. Rally organiser Liz Walsh said politicians were to be blamed.

“Politicians are using asylum seekers and instilling fear into the community and we are seeing this in the decreased number of people at the rally,” Liz said.

“This government and the opposition are using asylum seekers to win elections.

“Rudd said no children will be held in detention – now more than 1600 children are in detention, while people in community detention are living in poverty.”

Latest figures released by the Department of Immigration show 8797 asylum seekers are currently held in detention, which includes 1632 children.

The figures also show a total of 2752 asylum seekers living in the community awaiting their Australian residence approval. They are not allowed to work or study and live on $30 a day, which must pay for food, rent and bills.

Sister Brigid Arthur from Brigidine Asylum Seeker Project has been working closely with the asylum seekers for the past 10 years.
She said the rally will not change anything immediately, but it is important for people to show their support for the refugees.

“We need to take a stand against the racist and intolerable social policies of the government.

how to make your ex want you back

“We need to be looking after asylum seekers who have come to us for help. Instead, we are locking them up.”